Throwback Thursday to Reading, thank you staff and upcoming work! 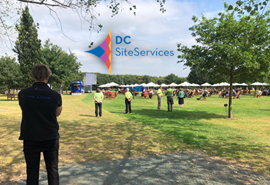 For those of you who are DC veterans you will know Dick and Janet, two of DC Site Services’ Directors who were here from the very beginning and established the Company in 1993. Dick and Janet first became involved in the Events & Festival scene back in the 60s, which resulted in them joining Reading festival’s ‘training school’ and have since then, in one way or another been involved with this iconic festival.

This festival season will mark the first time in FOURTY SEVEN YEARS that they have sadly not been involved with Reading due to COVID. We’re sure you’ll be back there next year!

We’d also like to take a moment to say a quick thank you to the staff who worked VJ Day, we received wonderful feedback from the client, thanking the team for “going above and beyond under difficult circumstances.” Well done crew.

In addition to this, we’re pleased to recruit for an upcoming event in September, the Battle of Britain Air Show! This takes place 18th – 20th September and is located in Duxford, Cambridge. If you’re local and would like to join the team, please log into your DCSS PAAM profile today to apply!

Thank you so much for all of your help this year, the events were successful and we are grateful for your support throughout the year.